Sailboat keels are more complex than many people give them credit for. Most people intuitively realize that the weight of the heavy keel keeps the sailboat upright and counters the force of the wind against the sails. But the keel does a lot more than that. For example, did you know that it is an airfoil that creates lift, just like the wing of an airplane?

Besides keeping the boat upright, a sailboat’s keel counters leeway—the drifting downwind a boat makes while being pushed by the wind. So the sails and the keel must work together to pull a boat windward.

Not surprisingly, as designers have embraced lessons learned on the water and in the air, keel design has grown into quite the science over the years. There are now dozens of different keel designs, and walking around a big boatyard can provide views of all sorts of interesting things attached to the bottom of boats.

What is a Sailboat Keel and How Does it Work?

The keel of a sailboat is the underwater profile of the boat that gives it its ability to sail.

A boat sailing downwind is pushed along like a leaf on the surface of the water. But modern sailboats are designed to sail into the wind as well, and to do that, they must embrace some basics of aero- and hydrodynamics.

The sails of a boat sailing upwind work like an airplane’s wings. Their curved shape acts as an airfoil. Air is accelerated over the outer edges, which makes lift thanks to Bernoulli’s Principle.

But there are two problems. Firstly, the boat will heel over as the wind pushes on the sails. Without a significant amount of ballast to counter the force on the sails, the boat will capsize. So the most basic job of the sailboat’s keel is to provide a heavyweight as low in the boat as possible to keep it upright in all conditions.

Of course, the weight could be added without a keel. Early schooners were loaded with stones for ballast. These vessels were very deep but more or less flat-bottomed. They couldn’t sail to windward very well because the entire vessel drifted downwind as the wind pushed on the sails. This drift is known as leeway.

To counter leeway, a keel employs yet another airfoil shape to make lift. This one is underwater, and then the lift it makes is created by the water passing over it as the boat sails along. This lift helps pull the boat to windward and reduces leeway. The more lifting force the keel can make, the better the boat can sail into the wind.

No sailboat can sail directly into the wind. If the boat is close to the wind, it is said to be “in irons.” That means that the air is not flowing smoothly over the sails. The better a boat is at sailing upwind, the closer to the wind it can get. Like those used on racing boats, high aspect ratio fin keels can sail 30 degrees or less to the wind. Most cruising boats must be 45 degrees or more off the wind before they can effectively sail.

The first progression toward modern keels was the encapsulated deep fin keel. This was a natural progression as designers began working out ways to shrink a full keel down.

Racing boats began tinkering with high aspect ratio fins. Eventually, this technology filtered down to the cruising boat world. These fins were generally cast directly from lead or iron and bolted to the hull. This construction results in some extra maintenance and care that must be taken. A bolted-on keel can be damaged in a grounding in ways that an encapsulated keel cannot. They were and are very robustly built, but they are nonetheless attached with bolts that can be bent.

With the wide adoption of bolt-on keels, designers could better tinker with their designs. Freed from the limits of what could be molded and encapsulated, the keel could take any shape at all.

One disadvantage of the fin keel is its deep draft. A shorter shoal draft keel is one way to fix the problem, but it will require more ballast, and its performance will suffer.

Bulb and wing keel designs came next. These are extra weights attached to the bottom of the keel to increase its effectiveness. Torpedo-shaped bulbs add weight low down, whereas wings provide an opposing lifting force to counter leeway.

Many of the shapes of keels in the winged keel group are descendants of the bulb keel. In many cases, winged keel designs are often built into the cast bulb.

When Was the Wing Keel First Used?

Like many innovations in yachting and sailing, the winged keel was first used as an attempt to gain an advantage during a famous yacht race.

In 1851, the schooner America was sailed to the UK to compete for the 100 Guinea Cup. The ornate and elaborate trophy spent the next 132 years defended successfully by America, to the extent that it became known as the America’s Cup. It is the oldest sporting trophy still contested in the entire world.

With so many wins under their belt, America was sure to lose at least one eventually. And that’s precisely what happened in 1983 when the Australian challengers succeeded with their yacht Australia II.

How did they do it? The same way that yacht designers have been innovating and creating before and since, of course. They look at the rule book and find ways to make a better boat within those rules. At the time, the 12-meter class rules were used for the race. The amount of sail area allowed was an inverse function to the boat’s length and weight.

Designer Ben Lexcen used the rules to his advantage. By figuring out how to make a shorter yet more effective keel design, he could make the yacht lighter while still carrying more sail area. The boat had a great design all around, with effective sails and rig. The combined total effect was that Australia II beat the defenders by an average of one minute on every upwind leg.

What is the Purpose of Wing Keels?

The technology and idea trickled down into even run-of-the-mill sailboats. But those sailboats don’t use their wing keels to win races; they use them to carry shorter keels. A shallow draft is an important consideration for many sailboat owners. Perhaps their home ports have shallow entrances, or perhaps they just like exploring shallow waters. Whatever the reason, the difference between a 4’6″ draft sailboat and a 6’6″ keel is enormous.

It’s not all good news for wings, though. There are some distinct downsides to having one of these hanging off the bottom of your boat. Two operational considerations should be weighed beside the initial cost of casting such a complex shape.

Firstly, what if you run aground? Winged keels are more or less flat on the bottom. Should you accidentally calibrate your depth sounder by grounding on a sandbar or mudflat, wing keels will be more challenging to get off than conventional fins. Not only does heeling the boat over have less effect on freeing you, but the shape of the keel itself can also create a suction in the mud.

Secondly, wing and bulb keels can get tangled in things. The most likely suspect that comes to mind is errant fishing gear, but the more likely problem will stem from your ground tackle. Boats can swing in every direction when wind opposes current, which can often cause a boat to back over its own chain. Doing so while spinning around can cause a line to foul on the wings.

Other Types of Keels

There are many other types of sailboats in the world. Some designers have gotten very creative in their efforts to reduce the draft of a sailboat, and some designs are born from one particular use or another for the boat.

A great example is the bilge keel or twin keel sailboat. These boats are popular in the UK, where enormous tidal ranges make it essential for boats to be able to be safely dried out when the tide goes out. The bilge keeler can sit on its two keels perfectly upright until the tide comes back again and then do it all over again in a few hours. Having this feature on your boat means that, at least in the UK, you’ll have many more choices of places where you can moor your boat, and many of those options will be much cheaper.

Another example of a specialized design with a purpose is the retractable swing keel. What is a swing keel? It’s a heavy, ballasted keel that can retract into the hull. It looks similar to a centerboard keel, only weighted and attached to a larger sailing yacht.

When the boat is offshore and sailing, it has a very effective high aspect ratio airfoil, works great, and has a deep draft. The keel can be retracted entirely in shallow water or if the skipper wants to beach the boat. These boats can explorer areas that most sailboat skippers can only dream of.

The different types of keels are just one fascinating vignette of the beautiful world of yacht design. If you’d like to learn more about what makes these beautiful boats tick, I highly recommend you check out the book Yacht Design According to Perry. Authored by renowned yacht designer Bob Perry, the book talks about all design aspects and provides insight into sailboats. 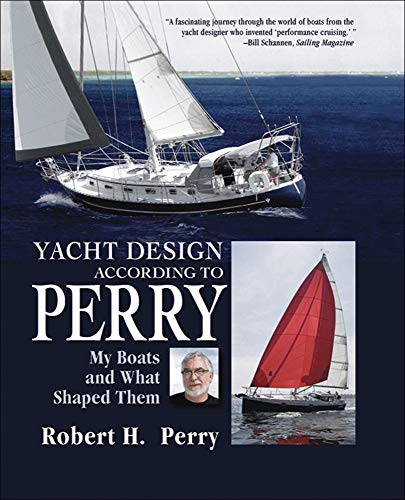 Yacht Design According to Perry: My Boats and What Shaped Them
Buy on Amazon