One very noticeable difference between operating a boat is that there are no posted speed limits. In fact, there are very few posted rules at all. Compared to driving a car, where every turn and hazard is clearly marked, boating seems like a journey into the Wild West.

That lack of structure gives many new boaters a false sense of security. Since nothing is telling you what to do, you can do anything you want, right?

It doesn’t take long before you figure out it doesn’t work that way. The lack of markings and warnings actually means you have to be more careful of the water, not less. It means that the obligation to foresee those hazards is on you and you alone as the skipper of your vessel.

So how does the responsible skipper know what factor determines the safe speed for a vessel? What is a safe speed, and is it always the same? Here’s a look at the rules of the road and what factors should be considered in determining a safe speed.

First of all, no discussion about safe speed would be complete without taking a moment to think about a broader topic–seamanship. Seamanship is defined by Merriam-Webster Dictionary as “the art or skill of handling, working, and navigating a ship.”

That’s a tidy definition, but a lot goes into good seamanship. On the sea, there are no roads to navigate by, no speed limits posted, and no place to pull over should the weather turn sour. A skipper who exercises good seamanship is on top of all of these things and more. They know possible problems before they spring up, how their boat handles and what to do if something goes wrong, and how to safely navigate and maneuver in close quarters and near other boats.

There’s no modern term to describe this type of decision-making and situational awareness in other parts of your life. There’s no “carmanship” or “bikesmanship.” Seamanship is a uniquely nautical concept that stems from a skipper needing to master the art of situational awareness. The only similar construct I know of is airmanship, the trademark skill of a good pilot.

What determines a safe speed for your boat is one of many things that go into seamanship. But it is certainly a foundational skill you should master before tackling others.

Safe Speed for a Vessel – The Law

Before digging too deeply into the decision-making process, let’s review what the law says. The following was taken from the US Code of Federal Regulations, which is in turn taken from the COLREGS. The COLREGS are the internationally-accepted regulations designed to prevent collisions at sea.

Every vessel shall at all times proceed at a safe speed so that she can take proper and effective action to avoid collision and be stopped within a distance appropriate to the prevailing circumstances and conditions. In determining a safe speed the following factors shall be among those taken into account:

(a) By all vessels:
(i) The state of visibility;
(ii) The traffic density including concentration of fishing vessels or any other vessels;
(iii) The maneuverability of the vessel with special reference to stopping distance and turning ability in the prevailing conditions;
(iv) At night, the presence of background light such as from shore lights or from back scatter of her own lights;
(v) The state of wind, sea, and current, and the proximity of navigational hazards;
(vi) The draft in relation to the available depth of water.

Which of the following is the most important factor when determining a safe speed? Notice that the rule is careful not to draw attention to one more than the other, and it is clear that these are “among those taken into account.” In other words, this isn’t even an all-inclusive list!

So, what factor should be considered in determining a safe speed? All of these and more!

What Is a Safe Speed for Different Types of Boats?

Every skipper of every vessel must be concerned about their speed. But it only makes sense that the faster your vessel goes, the more careful you should be.

If your boat is capable of more than about 25 knots, you fall into the category of a boat that can easily get into serious trouble. Your biggest problem in life is that nearly every other vessel on the water is moving slower than you are. So, despite what the rules of the road say, you will find yourself getting out of everyone’s way.

When viewed from the deck of a sailboat going five knots, few things are more haunting than a large speedboat headed in your direction at speed. At five knots, the world moves slowly, and you have time to react. But when something is coming at you at 30 knots, there is little you can do at 5 to get out of its way. You must trust the other skipper to make it clear early on that they see you and will avoid you. That trust might be misplaced in today’s age of glass helms and autopilots.

In addition to collision avoidance, some vessels must keep a careful eye on the wake they are throwing. All skippers are responsible for any damages caused by their wakes.

In narrow channels, wakes can damage docks and the boats attached to them. Big wakes can capsize rowboats, kayaks, or canoes. If people are walking on a rocky shoreline, a wake can make them slip and cause injury. If you wake a boat severely, you could damage it or toss its occupants overboard. Any number of these things could cause monetary damages, injuries, or even death.

Big vessels, every displacement hulls, can make huge wakes. Ships going at speed make mountainous wakes that can easily pile up in shallow waters and toss around otherwise seaworthy boats.

Another consideration is maneuverability. Big vessels need lots of space to turn and stop. When in restricted areas, these boats should preemptively slow down to the boat safe speed.

You might think sailboats get out of this conversation about speed, but you’d be mistaken. While the best wind speed for sailing might determine your vessel’s ability to speed up, you can go at a slower speed no matter what the wind.

But traveling under sail alone is rare these days. In truth, many sailboats are entering unfamiliar congested harbors and high-traffic density areas as motorboats. And as such, the same rules apply. They are heavy displacement vessels that maneuver slowly and are, on the whole, underpowered. Therefore, the skipper must plan accordingly.

In addition to the expectations of basic seamanship, many local authorities post actual boating speed limits. There are a few places where this resembles a car speed limit. For example, in a narrow canal or shallow water, you might be limited to no more than five miles per hour, or five knots, as the case may be.

More often than not, however, authorities give skippers a little more leeway than this. As a skipper, you are still responsible for figuring out what determines a safe speed for your boat. The size of the wake you throw and your overall speed are of more concern to the people around you. The result is the infamous “No Wake Zone.”

Which of these would be considered a safe boat speed? A no-wake zone is a clear sign to every skipper that there’s no reason to rush. They sprout up for different reasons, from heavy vessel traffic areas to narrow channels or navigational hazards. They’re found worldwide in harbors, inlets, and channels where boaters congregate. Some are marked clearly, and only common sense can tell you about others.

In an idle zone, your throttle should never go above in gear but idle. This is basically as slow as the boat can go while in gear. The speed over the ground will depend on the type of vessel and the water conditions, but if you went any slower than this, you would lose steerage.

We can all agree that marinas and docking situations are idle-speed zones. Idle speed zones are in similar tight situations where operators should exercise extreme caution.

Slightly faster is no-wake speed. This allows you to push the boat with more forward speed so long as there is no wake produced. The actual throttle or engine setting would depend on your hull design and the current conditions. No-wake speed going with the current is much faster than no-wake speed plowing into it.

Some might argue that displacement boats always go at no-wake speeds since these boats never throw the huge wake a semi-displacement or planing hull would. This misses the mark, however. Displacement hulls make wakes, in some cases huge ones.

No wake zones are about caution and how much of it you should be exercising. For example, if you’re cruising down the Intracoastal Waterway in your sailboat and pass a “No Wake” Sign, you might decide to keep churning along at six or seven knots. But you are making a wake, and the whole point of the zone is to alert you to a hazardous area. No-wake speed in a sailboat is not cruising speed–it’s pulling the throttle back to a low setting and reducing to two or three knots.

The planing hull of a dinghy or a go-fast fishing boat is a better analogy. These boats have a direct reference–they need to be at a very slow speed not to throw a big wake. You’re clearly not at no-wake speed if you’re on a plane. If you are plowing–that is, going slower than planning but making a huge wake–then your huge wake is a clear sign that you’re still doing it wrong. So you must pull the power way back until the boat makes no wake at all. 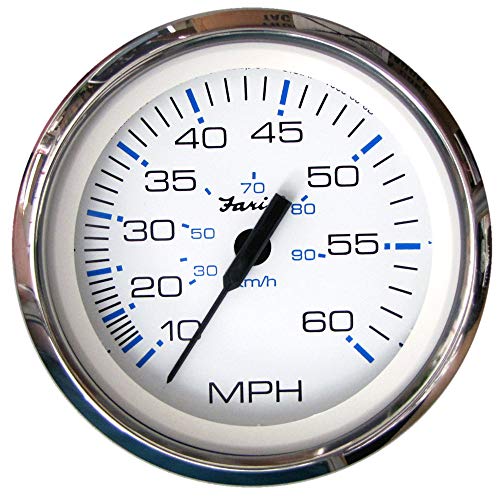 A minimum wake zone allows you a little more leeway. You can proceed faster than no-wake speeds. That’s a big help to go-fast boats because a no wake speed is usually quite slow.

What Determines if a Speed Is Safe for Your Boat? The Skipper Does!

Whether you want to sail across the Atlantic or simply go tubing on the lake, you should always consider the safe speed for a vessel to operate. It should come naturally if you’re on top of your seamanship game. But if you let your guard down and lose your situational awareness, it is easy to get in trouble fast on the water.

I think of seamanship as a game of “what if.” What if that sandbar sticks out farther than the chart says? What if the gear shift cable sticks as I back into this slip in the marina? What if there’s a kayaker around where the river bends? What if someone is swimming next to that anchored boat?

One last parting thought. A wise old skipper with excellent seamanship skills once taught me a valuable lesson when docking–but I think it applies to almost everything when boating. “If bad things happen, it’s best to make sure they at least happen slowly.”