What Exactly is a Transmission?

Everyone knows that a transmission is an integral part of an automobile. In its most basic form, the transmission is the part of the car that transmits the power from the engine to the wheels.

Of course, there are many types of transmission installed on cars today. Manual transmissions allow the driver to select the gear they want but require the use of a clutch pedal. Automatic transmissions do away with all the work and have a simple “drive-neutral-reverse-park” operation. To accomplish this, they have a complex design that requires a torque converter, hydraulic pump, and planetary gears that can create numerous gear ratio combinations.

Imagine driving a car that only had one forward gear. You would press on the gas pedal and go faster and faster, but eventually, the engine RPM would touch the redline. After that, the motor can’t push the car any faster.

No one gear can drive a gasoline-powered car. Cars operate under too broad a set of conditions—they must be able to accelerate and drive from a dead stop at traffic lights up to 80 mph or more. And all of this needs to be done with an eye on the best fuel efficiency, of course.

If you’ve ever driven a manual transmission car, you are familiar with these limits. If you start the car in first gear, you can only accelerate up to about 20 mph before you need to shift up into another gear. If you start the car in a higher gear like second or third, the engine will accelerate very sluggishly. What if you need to reach operating speeds on a steep hill?

Automatic transmissions take the guesswork out of it, but the physics are the same. The transmission contains various gear ratios that allow the motor to work efficiently no matter the car’s speed.

What is a Marine Transmission?

Boats work differently, mainly because the boat engine power is transferred to a propeller and not a wheel. Where are wheel could be spun faster and faster to make the car go quicker, a propeller RPM has speed limits. You can only spin a propeller so fast.

Believe it or not, props are actually pretty complex little things. A boat propeller can be likened to an airplane propeller—they both work using the same physics tricks.

The blades of a propeller create lift as the propeller rotates, just like the wings of an airplane or the sails of a boat. But since this lift is used to propel a vessel forward, it is instead called thrust. If you imagine the blades on a desk fan blowing air toward you on a hot day, this is roughly what boat propellers do. Only they move water, and they move much quicker.

The propeller blades work by accelerating the water flow over its upper surface. The faster the prop spins, the faster that water accelerates. That accelerating water is the key to success, but it creates a low pressure that pulls the prop forward.

This pressure differential also introduces some limits to the propeller, however. At some point, the pressure differential becomes too great, and bubbles begin forming on the propeller. Like an airplane stalling or a sail luffing, those bubbles indicate that the prop is no longer producing its maximum power. As a result, speed will begin to diminish, and the bubbles can damage or reduce the lifespan of the prop. When this happens to a prop, it is said to be cavitating.

The shape of a propeller blade is very carefully designed to make the maximum amount of thrust it can given its diameter and pitch. Small boats can’t change the pitch of their propellers while cruising, so a balance must be found by the boat designers to figure out what is going to provide the best efficiency and optimal speed. To find the right combination, they need to look at the size and weight of the boat, the type of hull it has, the speed at which the prop shaft spins, and the amount of space available for a propeller to be mounted. 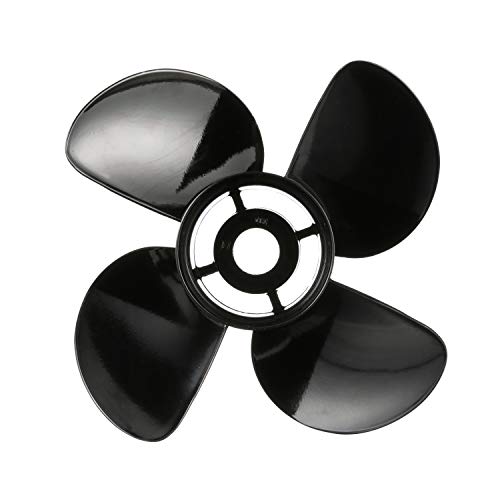 Why Don’t Boats Have a Transmissions?

Given these limits regarding a boat propeller, why dont boats have transmissions? A transmission is used in a car to propel the wheels faster and faster over the pavement without redlining the engine.

But on a boat, the engine redline must be matched to the propeller’s even lower redline. If you can’t spin a propeller too fast, you can’t even reach the engine’s redline. So in order to not cavitate during normal operations, nearly all marine engines have a reduction gearbox.

Since they don’t have transmissions, you might also wonder, why don’t boats have gears? But they do have gears, just not the same way cars do.

Boats have a reduction gear installed, and only one for each direction it can go (forward or reverse). This gear is calculated based on the top RPM that the engine can produce and the speed at which its prop can be spun.

So, for example, let’s look at a boat that has a 2:1 reduction gear installed, and its engine is rated to 3,000 RPM. In this case, when the engine is at full speed, the gearbox will allow its prop to spin at 1,500 RPM.

This is vital because the amount of power that the engine puts out at that speed will need to be optimized into forward motion by the prop. Props come in all shapes and sizes depending on what type of boat it’s driving. Having the right blade pitch on the prop is vital to ensuring that the engine can spin it at its rated speed for full power. The wrong pitched prop is something like having the car in the wrong gear.

The Marine Gear, The Automatic Transmission for Your Boat

So, do boats have marine transmissions? The term is often batted around when discussing the marine reduction gear found on every type of vessel, from the smallest outboard motors to a giant inboard engine on a cargo ship. But in the classic sense, boats do not have gears or shifters like cars do. They don’t have automatic transmissions or manual transmissions—they just have a simple gearbox with a simple selector–forward, neutral, and reverse rotation. What more does a skipper need?

What is a boat transmission called?

The transmission on a boat is called the gearbox. It is simpler than most automotive transmissions—it only has forward, reverse, and neutral. The only task that the gearbox does, besides connecting the engine to the propeller, is to provide a reduction gear so that the propeller does not spin too fast.

Do boats have automatic transmissions?

Boats do not have transmissions with multiple gears and clutches as cars do, so there is no need for an automatic transmission. Instead, they have a simple gear shifter that can be set to forward, neutral, or reverse. Once in gear, the throttle adds power to the engine—just like the gas pedal in a car.