Of all of the systems on a boat, the fuel system seems to be one of the simplest. After all, how much different can it be from a car?

But, unfortunately, it is more complicated. Some of it is simply because of the presence of so much water–water everywhere, all the time. And some issues are due to how little fuel some boats consume. If you only put one or two tanks of fuel in your car every year, you’d have more problems with it, too!

Here’s a look at some of the symptoms and signs of a boat’s gas tank vent problem.

There are a few characteristics that set boat fuel tanks and systems apart from one another.

Firstly, gasoline and diesel systems are different in design. Gasoline fumes are hazardous in boats, where they can accumulate in confined spaces and are easily ignited by wiring or heat. Therefore, boats with gasoline motors must have a vented fuel tank installed and blowers to evacuate any fumes out of the boat.

Diesel fumes are far less likely to combust, but you should take precautions nonetheless.

The second consideration is what type of motors are installed. For example, an outboard motor with portable tanks requires a different level of precaution and system design than an inboard boat with below-deck fuel tanks.

How Do You Know if You’ve Got Boat Gas Tank Vent Problems?

One of the most common problems is with the boat fuel tank vent. Problems nearly always occur during fueling at the gas pump. Most fuel pumps put the good stuff faster than our engines use it, so any problems with the vent show their heads first there.

Before we dive in and look at fuel tank venting problems, let’s take a minute and reflect on why vents are so important in the first place. A vent line allows air in and out of a tank. If a tank is sealed, and you pull the liquid out for use, something has to be added back. If there is no way to allow air into the tank, the lowering fluid level will create suction. Eventually, the liquid will stop flowing out.

For this example, a fuel tank has no vent or perhaps has a blocked fuel vent. If that’s the case, fuel may flow to the engine for a short time until a suction or vacuum forms inside the tank. Once the force of that suction exceeds the pull of your fuel pump, fuel will no longer flow, and the engine will stop.

Of course, vents are also crucial during the fueling process. If you pour a liquid into the tank, the air from the tank needs an escape path. The fuel pump will likely shut off prematurely if the only escape path is through the filler neck.

The most common problem during fueling is having gas spewed out the hull vent or fill hose. When you aren’t expecting it, it can make a real mess. It helps to fuel slowly and carefully, but sometimes you have to be ready with a fuel absorbent mat – just in case!

Causes of a Blocked Vent Line

A blocked vent line can become evident in several ways. In the worst-case scenario, the engine mysteriously shuts down. More likely, however, you discover the problem during fueling. Either fuel erupts out of the vent or the filler neck, or the fuel pump begins shutting down too soon.

A fuel vent hose can get plugged up in several ways. A basic inspection is in order. Start at the most likely cause—something has gotten stuck in the outer vent on the hull design. Some designs have a bug screen that can be removed and cleaned. Yes, it might just be that simple.

If it’s not that easy, you may have to remove the vent line for inspection or replacement. Before you start messing with the line, though, take it off the inside of the outer hull vent and ensure that air moves freely through the through-hull vent fitting.

It’s unlikely that something has plugged up the hose entirely. A more likely explanation is that sag or bend in the hose allows fuel to pool, preventing air from flowing freely.

The fuel vent hose should run from the through-hull and then loop upward. It should not provide a straight path into the tank for water!

After creating a loop, it should then follow the straightest path to the fuel tank as possible. Make sure there are no sags or low spots.

If you’re inspecting the hose and still haven’t found the cause, it’s time to look closer to the tank. Remove the hose from the tank fitting and inspect the port on the tank. You don’t want to be doing this if the tank is full! Be careful to avoid spills, and have a few clean fuel absorber mats handy, just in case.

Outboard boats with external, deck-mounted fuel tanks aren’t without their problems. Recent EPA rules have mandated that a new fuel tank be sealed to avoid spills and avoid gasoline vapors escaping into the atmosphere.

For them to work without a proper vent, most fuel lines now come equipped with a special fitting that vents the tank and prevents airlocks without venting out the fumes. However, these can stick, so inspect them carefully and give them a little tap if you think the tank isn’t venting properly.

More than any other activity, boating teaches you the value of an ounce of prevention.

Many fuel problems stem from dirty fuel. Gasoline and diesel both have their demons that you must be careful to avoid.

Gasoline problems usually stem from ethanol fuel. Entire books could be written about this problem, but suffice to say that avoiding ethanol is to every boater’s benefit. Most marinas sell ethanol-free fuel. Ethanol on its own is harmless, but left in a tank with any amount of water moisture will create a huge mess.

Diesel is prone to algae and growth in the tank if moisture is introduced and left too long. The foul muck that results will quickly clog fuel filters and stop engines. It usually happens after a bumpy ride churns all the gunk up from the bottom and sides of the tank.

The moral of the story is to keep a dry and clean fuel tank. If you haven’t used the boat in a while or you’ve wound up with some bad fuel, the best solution is to have the tank professionally polished. Also, make sure your fuel tank fill gas cap closes securely and replace its O-ring seal when necessary.

Keep Spare Fuel Filters Onboard at All Times

Stuff happens, and some water or gunk in your tank is inevitable. That’s why it’s vital that you carry spare fuel filters onboard and you know how to change them. For diesel engines, this means you may need to know how to bleed the fuel lines, too.

You might be surprised at just how many different types of boat fuel vents there are on the market. Older boats are usually equipped with a simple open through-hull with a cover to keep most water out. In some cases, the opening has a screen on it.

It’s not uncommon to find this type of vent covered by a simple clamshell-shaped cover for a little extra protection.

A newer style vent opening, like the ones made by Perko, is flush to the hull. They can be disassembled for cleaning, but they are also cleverly designed to keep water out of the tank.

No matter what style you choose, make sure that it is one of the US Coast Guard-approved vent fittings.

If you have problems with fuel coming out of the vent during fueling, you might want to consider installing a fuel surge protector in the vent line. This apparatus is basically a check valve that will allow the tank to properly vent and also capture any liquid that tries to squeeze past.

Some surge protectors are integrated into new-style hull vents, while others are designed to be put in line between the tank and the vent. These are a big help on boats where it’s difficult to hear the tank getting full or where the sailboat design makes proper fueling awkward. 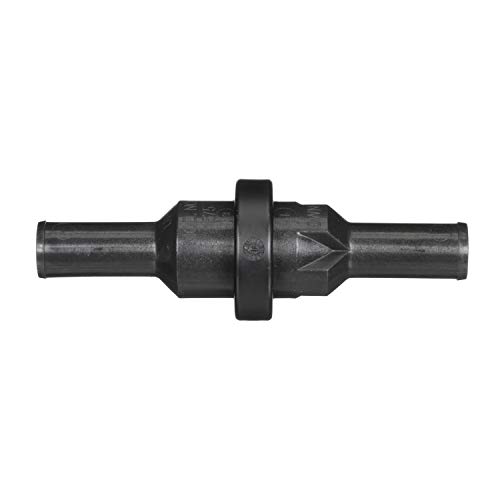 While you pull over to top off your boat, it’s essential to realize that boat fuel pumps aren’t quite as reliable as those for automobiles. Most of us put the pump on automatically and walk away when we drive into a gas station. You should never do that with a boat!

Should boat gas tanks be vented?

All fuel tanks should be vented to prevent airlocks. An improperly vented tank can restrict fuel flow to the engine and result in engine failure. On new deck-mounted outboard fuel tanks, fuel lines include an EPA-approved vent regulator. This device vents the tank but prevents fuel vapors from getting out.

How does a boat gas tank vent work?

Boats have air vents built into their fuel tanks to allow air to move in and out of the tank. That way, as fuel is used up, air can enter the tank. This prevents an airlock, which would otherwise cut off fuel flow to the engine. Vents also allow air out of the tank during fueling. Vents are typically simple—a vent tube runs from the tank to outside the boat. The hull will have a port that prevents water from getting into the fuel tank. Some newer boats are equipped with an in-line venting regulator, which prevents vapors and gas from getting into the atmosphere or water.

What happens if a fuel tank is not vented?

If a fuel tank isn’t vented, a suction or “airlock” can form as the engine burns fuel. Eventually, the suction in the tank will be stronger than the pull of the fuel pump. When this happens, the fuel will stay in the tank, and the engine will stop. Opening the fuel filler lid should restore flow to the engine.